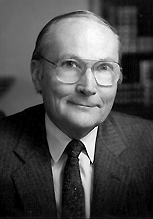 Mr. James Donahue is a well-known and respected attorney in Northern California, and, specifically, the Sacramento area. James has specialized in trial work since 1962. He has successfully tried over 200 jury trials, and handled hundreds of arbitrations and mediations.

Upon graduation from college, James served with the U.S. Army Counter-Intelligence Corp in Japan. After a period of time working with the California State Automobile Association in the claims and legal departments, James joined the Douglas McDonald Law Firm in Sacramento in 1964. He later formed the litigation firm of McDonald & Donahue.

In 1975, James was the founding partner of the firm Donahue & Callaham, which has today become Donahue, Bates, Blakemore & Mackey.

Since 2000, James has acted as Arbitrator, Mediator, and Judge Pro Tem in Sacramento, Placer, Solano and El Dorado County Courts.